The notion that an imminent pollinator decline threatens food production globally has been widespread among the public since 2007, when the term Colony Collapse Disorder brought the concern into the limelight alongside climate change and biodiversity losses. Although this initial catastrophism contributed to the implementation of highly visible policies, such as the temporary ban of 3 neonicotinoid pesticides in Europe, and a presidential memorandum in the U.S. to promote pollinator health, the debate is now shifting back to a more nuanced and scientific tone.

The trends in wild pollinator abundance and their role in food production are the object of a relatively new research field. In fact, the notion that pollination services from wild insects could justify efforts for their conservation is still actively debated, as recently as in Kleijn et al. (2015).

In contrast, beekeeping and honeybee pollination have been studied for decades. Even though important gaps remain to be filled there too, great insights are to be gained from bringing together disciplines that have worked on beekeeping separately for decades.

In our article, we bring together the basic tools of population dynamics modeling in bee colonies with a dynamic optimization model of beekeepers to formalize the factors—both economic and biological—that determine honeybee populations. We draw from and bring together the economics literature on pollination and beekeeping (see Rucker et al.,2012) and the entomology literature on honey bee population dynamics (see Torres et al. 2015).

Our premise is that honeybees, unlike wild pollinators, are livestock. We formalize how the price of honey, the demand for pollination services, and the supply of nectar and pollen from crops throughout the year determine the optimal stock of bees of a professional beekeeper.

The most striking insight for policy design is that subsidies for honey can have an ambiguous effect on the stock of honeybees because honey is both an output and an input of beekeeping. This means that programs such as the now defunct honey subsidy program in the U.S. (Muth et al. ,2003), should be avoided or implemented with much caution. Instead, policies designed to improve the quality and quantity of forage available to beekeepers throughout the year (nectar and honey), present a more promising alternative.

In addition, our contribution sets the methodological foundations for an empirical analysis of the causes of changes in honeybee abundance, combining biological factors, such as pesticides or parasite damage prevalence with economic factors, such as honey prices and opportunity cost of beekeeper’s labor. Only a combination of these types of factors is susceptible to help explain the contrasted trends in global honeybee abundance. Indeed, while honeybee numbers in many industrialized countries have declined over the last half-century (see figure for Switzerland for instance), countries such as Turkey, Brazil, or China have seen the size of their beekeeping industries grow several folds in the same period.

Although catastrophism on pollinator collapses will have contributed to spreading many false notions among the general public, there might be a silver lining in the emergence of a multidisciplinary field of research and policy for integrated pollination management, where wild and domesticated pollinators are managed better, and jointly. In that regard, pollination management may provide a good example of how ecosystem services are integrated into human economies over time. 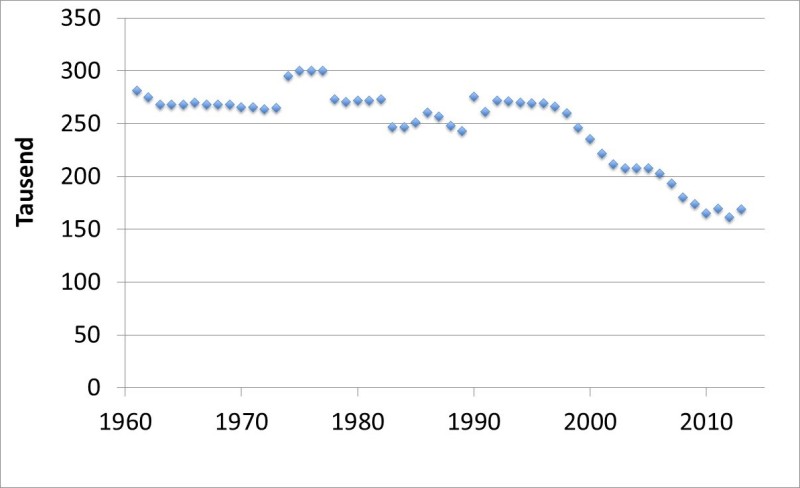 Champetier, Antoine, Daniel A. Sumner, and James E. Wilen. „The bioeconomics of honey bees and pollination.“ Environmental and Resource Economics 60.1 (2015): 143-164.